. It turns out that when you divide the odd integers into 2 halves (see the following two sequences), each half also contains infinitely many prime numbers:

So does each of the following sequences:

The Dirichlet’s Theorem on Arithmetic Progressions

An arithmetic progression is a sequence of numbers where each term is obtained by adding a constant to the previous term. The constant is called the common difference. If the first term is

and the common difference is

, the following is an arithmetic progression:

and the common difference

are relatively prime (i.e. the only common divisor of

The above 4 sequences of integers are all arithmetic progressions where the first term and the common difference are relatively prime. Take the third example

Note that in the third example, the first 5 terms are primes (

) but the sixth term is not a prime. Thus

is a finite arithmetic progression of length 5 consisting entirely of primes. The first 6 terms

in the fourth example is an arithmetic progression of length 6 consisting of entirely of primes.

It is a well known recent result that the prime numbers contains finite arithmetic progressions of any length. This result is known as the Green-Tao theorem and was proved by Ben Green and Terence Tao in 2004.

In this post, we present an alternative proof that there are infinitely many prime numbers in addition to the basic proof presented in the previous post Euclid’s Proof of the Infinitude of Primes. Historically, this alternative proof is due to Christian Goldbach (from a letter to Leonhard Euler in 1730). It is an elegant proof that is worthy to be considered as straight from “The Book” by Paul Erdos (at least “The Approximate Book”). Specifically it is one of the six proofs for the infinitude of primes found in [1].

This proof of infinitude of primes uses the notion of Fermat numbers. We present the proof in two parts.

For a proof of the infinitude of primes using topology, see The Infinitude of Primes – a Topological Proof.

such that for every

are relatively prime (i.e. if

implies that there are infinitely many primes. Each

. It is clear that

would not be relatively prime).

One way to get the integers

in Theorem 1 is through the Fermat numbers.

for some non-negative integer

We can prove the above recursive relation by induction. Clearly

). Suppose that the recursive relation

. The following derives the recursive relation

for the general case 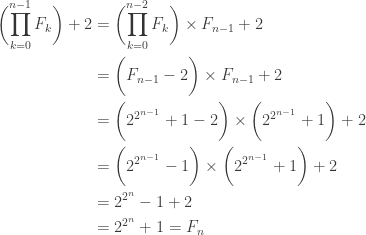 We now show that any pair of Fermat numbers are relatively prime. Suppose that

is a common divisor for

. Because of the recursive relation

divides 2. Since the Fermat number

is an odd integer,

See here for a generalization of the proof in this post, without the Fermat number point of view.

The oldest known proof that there are infinite number of primes is the one that is due to Euclid (around 300 BC). It is probably the most accessible. So I start the blog by stating this proof.

Theorem. There are infinitely many prime numbers.

, we can always find another prime number not on the list.

be a prime divisor of

would divide 1 (the difference of

). This is impossible. So

must a prime number not on the original list. Hence there must be infinitely many prime numbers.