In some cryptography applications such as RSA algorithm, it is necessary to compute

are very large numbers. We discuss and demonstrate an efficient algorithm that can handle such calculations. This general algorithm has various names such as fast powering algorithm, square-and-multiply algorithm and exponentiation by squaring.

The problem at hand is to compute

. The naïve approach is to compute by repeatedly multiplying by

is large (e.g. an integer with hundreds of digits), this approach is difficult or even impossible (given the current technology). In this post we discuss an alternative that is known as the fast powering algorithm.

Using the naïve approach described earlier, we would do something like the following:

In this naïve approach, we would multiply two numbers at a time and then reduce the result modulo

so that the numbers do not get too large. The above example would involve

divisions for the reduction modulo

. Great difficulty comes when the power is not

and instead is an integer with hundreds or even thousands of digits.

Note that in the above naïve approach, the power is reduced by one at each step. In the fast power alternative, the power comes down by an exponent of two in each step. The idea is to use the binary expansions of the exponent

to transform the computation of

into a series of squarings and multiplications. To this end, we write

as a sum of powers of two as follows:

. Note that each term is the square of the preceding term, hence the word square in the name “square-and-multiply”. To make it easier to see, we put the results in the following table. 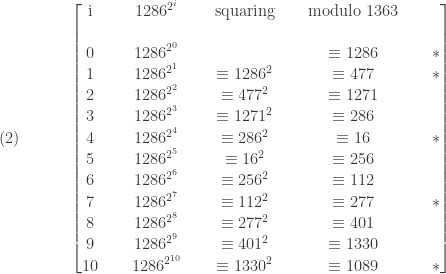 is calculated as follows:

We have the answer

. The calculation in (3) is the step that gives the word “multiply” in the name “square-and-multiply”. In this step, we multiply the results obtained from the previous step.

We now tally up the amount of work that is done. The calculation in table (2) requires 10 multiplications for the squaring and 10 divisions for the reduction modulo

. The calculation in (3) requires 4 multiplications and 4 divisions for the reduction modulo

Compute the binary expansions of the power

. In particular, we assume that

is the result of squaring the previous term

. We arrange the calculation in the following table. 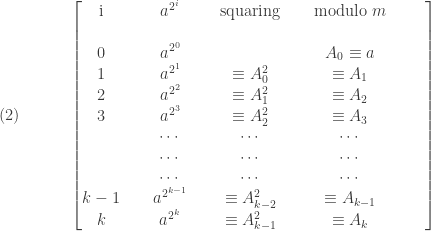 The last line in (3) is to be further reduced modulo

need to be used.

We now establish an upper bound for the number multiplications. Step (2) requires

many multiplications since some of the

many be zero. Step (3) also requires at most

many divisions to reduce modulo

. So altogether, the algorithm requires at most

. So the fast powering algorithm requires at most

For example, when the power

, which is a Mersenne prime, which has 39 digits. Now

. By the above calculation, the fast powering algorithm would take at most 254 multiplications and at most 254 divisions to do the power congruence computation.

The fast powering calculations demonstrated in this post can be done by hand (using a hand-held calculator). In real applications, such calculations should of course be done in a computer.

Use the fast power algorithm to show that

Note that one congruence is encryption and the other one is decryption. We demonstrate the second calculation.

In doing the second calculation, we use a little bit of help from Fermat’s little theorem. The modulus

is a prime number. So

The binary expansions of

. The computation is displayed in the following table. The rows with * are the results that we need for Step (3). 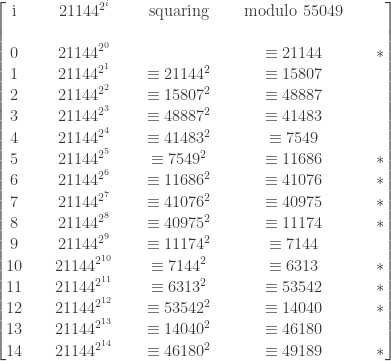