In working with the notion of congruence modulo

is a positive integer, one important calculation is finding the powers of a number

. In one particular situation the calculation of interest is to identify the power

. One elementary tool that can shed some light on this situation is the Fermat’s little theorem. This post is a self contained proof of this theorem.

Before discussing Fermat’s theorem and its proof, let’s look at an example. Let

, which is a prime number. Calculate the powers of

. Our goal is to look for

First of all, if the goal is

or a multiple of

is a multiple of

for any positive integer

. So we only need to be concerned with numbers

that are not multiples of

that are not divisible by

Any number greater than

and is not divisible by

is congruent modulo eleven to one integer

. So we only need to calculate

. The following table displays the results of 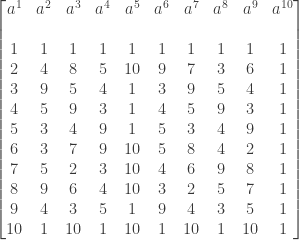 The above table indicates that to get

, the power can stop at

is a number that is not divisible by the modulus.

The following is a statement of the theorem.

refers to the greatest common divisor of the integers

are said to be relatively prime. We also use the notation

to mean that the integer

without leaving a remainder.

In the discussion at the end of the above example, the base

is a prime number,

is a number that is not divisible by the modulus

is equivalent to the condition

. See the section called Variations below.

We will present below a formal proof of the theorem. The following example will make the idea of the proof clear. Let

For each of the above numbers, find the least residue modulo

. The following shows the results.

The above calculation shows that the least residues of

are just an rearrangement of

(10 factorial) is relatively prime with

, we can cancel it out on both side of the congruence equation. Thus we have

The above example has all the elements of the proof that we will present below. The basic idea is that whenever

are relatively prime, taking the least residues of

(possibly in a different order).

We have the following lemma.

be a prime number. Let

be a positive integer that is relatively prime with

. Then calculating the least residues of the number

be the least residues of

is the number with

. Our goal is to show that

. To this end, we need to show that each

and that the numbers

. By Euclid’s lemma, either

is a positive integer less than

. So we have a contradiction. Thus each

Now we show the numbers

numbers). To this end, we need to show that

are relatively prime, there is a cancelation law that allows us to cancel out

on both sides. Then we have

are positive integers less than the modulus

Taking stock of what we have so far, we have shown that

. Both sides of the set inclusion have

distinct numbers. So both sides of the set inclusion must equal.

be a prime number. Let

be a positive integer such that

. By Lemma 2, the least resides of

. Thus we have the following congruence equations:

Just as in the earlier example, we can cancel out

on both sides of the last congruence equation. Thus we have

There are several ways to state the Fermat’s little theorem.

Theorem 3 is a version of the Fermat’s theorem that is sometimes stated instead of Theorem 1. It has the advantage of being valid for all integers

without having the need to consider whether

are relatively prime. It is easy to see that Theorem 3 implies Theorem 1. On the other hand, Theorem 3 is a corollary of Theorem 1.

To see that Theorem 3 follows from Theorem 1, let

be any integer. Suppose

are not relatively prime. Then they have a common divisor

is an integer multiple of

and any power of

are relatively prime follows from Theorem 1.

We now consider again the versions that deal with

. The following is a side-by-side comparison of Theorem 1 with another statement of the Fermat’s little theorem. Theorem 1 is re-labeled as Theorem 4a.

that is not divisible by

if and only if

. It is straightforward to see that if

. For the converse to be true,

must be a prime number.

, the following version is also an equivalent statement of the Fermat’s little theorem.

that is not divisible by

The statement (2) is a stronger statement. Any positive integer

that satisfies (2) would satisfy (1). This is because the set of all integers

is a subset of the set of all integers

However, statement (1) does not imply statement (2). Any composite positive integer

satisfying statement (2) is a prime number. Thus the converse of Theorem 4b is true. We have the following theorem.

be an integer with

is a prime number if and only if statement (2) holds.

is Theorem 4b. To show

, we show the contrapositive, that is, if

is not a prime number, then statement (2) does not hold, i.e., there is some

is not prime. Then

. By way of a contradiction, suppose

. This is impossible since

. This establishes the direction

As a Carmichael number,

satisfies statement (1). However it would not satisfy statement (2). By the proof of Theorem 5, if

is a prime factor of

is a divisor of

. Thus statement (1) is a weaker statement.

Any statement for the Fermat’s little theorem can be used as a primality test (Theorems 4a, 4b or 4c). On the face of it, Theorem 5 seems like an improvement over Theorem 4a, 4b or 4c since Theorem 5 can go both directions. However, using it to show that

is prime would require checking

has hundreds of digits, this would be a monumental undertaking! Thus this primality test has its limitation both in terms of practical considerations and the possibility of producing false positives.