The Legendre symbol is

where the bottom argument is always an odd prime and the top argument can be any integer. When

is an integer that is relatively prime to the odd prime

carries information on whether the integer

. The following gives the definition of the Legendre symbol.

has the prime factorization

, the Jacobi symbol is defined as follows:

For convenience, we define

. A slightly different, but equivalent, definition is that whenever the odd integer

has the prime factorization

are not necessarily distinct), the symbol

is defined as follows:

The Jacobi symbol is defined using the Legendre symbol according to the prime factorization of the bottom argument.

Properties of The Jacobi Symbol

Now that the Jacobi symbol has been defined based on the Legendre symbol, there are two natural questions.

For the first question, the following is true: If

. The contrapositive of this statement is that if

is a quadratic nonresidue modulo the odd integer

has no solutions. However, the value of

does not imply that

has no solutions. Note that both equations

have no solutions. This means that the value of

is the product of two Legendre symbols of -1.

be an odd positive integer. Let

. The converse does not hold if

is not a prime.

has a solution. Let

be the prime factorization of

. By the Chinese remainder theorem, the equation

has a solution for each

. it then follows that the equation

has a solution too for each

. It follows that the Jacobi symbol

Proof
The lemma is established by the following derivation:

are odd integers, the right-hand-side of both equations are even integers and thus

The second point is clear. If the bottom argument is an odd prime, the definition of Jacobi symbol leads to the Legendre symbol.

For bullet points 3, 4 and 5, simply write out the Jacobi symbol and then use the corresponding properties of the Legendre symbol.

Now the proof of bullet point 6 (the law of quadratic reciprocity). Let

be their prime factorizations. Note that the primes

are not necessarily distinct and the primes

are not necessarily distinct. However,

are relatively prime. Consider the following derivation of the product 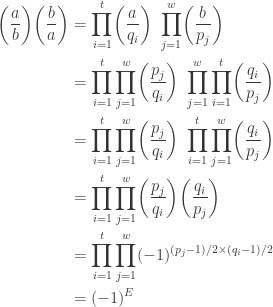 The bullet point 6 is established after the quantity

is simplified as follows:

Now consider the bullet point #7 (the first supplement to the law of quadratic reciprocity). The proof is an induction proof on the number of prime factors of

is a prime, then it is done. So we assume

being a product of

primes, the property is true for

being a product of

. The most important case is the of two prime factors.

With the 2-case established, it is straightforward to carry out the remainder of the induction proof of bullet 8.

, an example where both the upper and lower arguments are primes. In the previous post, the example is calculated using only Legendre symbol. Here we work it in Jacobi symbol. As much as possible, we flip the symbol without factoring. 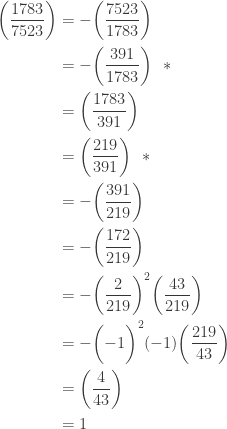 One advantage of using Jacobi symbol is that when the upper argument is an odd integer that is not prime, we can still flip it (the steps with *). Then reduce and then flip again until we reach a point with small numbers. Thinking in Legendre symbol only, the steps with * cannot be flipped. As Jacobi symbols, they can be flipped freely as long as the arguments are odd integers. The advantage may not be apparent in this example. When the composite integers are large to the point that their factorizations are in effect not obtainable, this advantage is huge.

is not a prime. Here we use Jacobi symbol to demonstrate that factoring is not needed. We can start by flipping. We have the following derivation.

Note that the original symbol to evaluate is a Legendre symbol. The interim steps are done with Jacobi symbol as much as possible. With the Jacobi way, the symbol is flipped, reduced and flipped again multiple times. The derivation seems long. However, the flip-reduce-flip is much faster than factoring when the numbers involved are large.

4852777. Both numbers are not prime. The symbol has to be evaluated as a Jacobi symbol.

The above derivation seems long in that there are quite a few steps. But many of the steps are flip-reduce-flip-reduce that are easy to do. The steps are all done without factoring, except when the top argument is an even number. The Jacobi symbol

is -1. In this case, it gives definite information about the status of quadratic nonresidues. We know for sure that

is a quadratic nonresidue modulo the odd integer

17327467. Both numbers are not prime. As in Example 3, the symbol is evaluated using Jacobi symbol.

gives ambiguous information about the status of

17327467 being a quadratic residue or nonresidue modulo

48746413. In this case, the Jacobi symbol cannot tell us whether the equation

has a solution. In such a case, the only way to know the status of quadratic residue is to know some additional information, namely the factoring of the numbers. This example is small enough that

By knowing the factoring of

. The Legendre values of -1 indicate that these two equations have no solutions. By the Chinese remainder theorem, the equation

has no solutions. Hence

or the solvability of the equation

Example 3 shows that when the Jacobi symbol produces the value of -1, the top argument

is a quadratic nonresidue modulo the lower argument

. Example 4 shows that when the Jacobi symbol produces the value of 1, the picture is murky. In such a case, settling the question of whether the top argument

is a quadratic nonresidue modulo the lower argument

requires additional information. Example 4 shows that if we can factor the lower argument

, then evaluating the individual Legendre symbols (based on the prime factors) will help answer the original question. This points to the possibility that solving the equation

is not feasible when the factorization of a large composite modulus

3 thoughts on “The Jacobi symbol”